This page sets out the history of postal services in Hartley and district.

Dartford has a long history as a post town, going back to the 1630s, when the postmaster was paid the sum of 1 shilling (5p) a day.  The town was the first stage for the post riders taking post from London to Dover and the continent.  Originally post was taken by rider on horseback, changing horses at the stages, in 1635 the Dartford postmaster said he needed 16 horses for the job.  In theory the post should have travelled at 7mph on the Dover Road in summer and 5mph in winter.  Thus post, which was despatched daily from Dover between 5 and 6pm should have arrived at Dartford at either 1am or 4am, but in reality was much slower.  Mailcoaches were introduced in 1784, which increased the speed of the post to 7mph.  The post left London for Dover daily at 8pm and the return journey from Dover at 6.30pm.  The Saturday Magazine (488kB Acrobat file) of 1 December 1832 gives a good description of the Post Office in the days before railways.

Our area was very isolated for the post, as there was no onward post delivery from Dartford, like there was for Sutton at Hone (from 1804), Greenhithe and Swanscombe (from 1830).  People would have the choice of either collecting the post from Dartford or one of the receiving offices, or await delivery by carrier.  In 1831 a number of London businesses complained about poor deliveries of their letters in the neighbourhood of Dartford, and in particular at Ash.  The Post Office replied that the only real option was to send them to the receiver's house at Farningham and then collecting them or arranging with "some of the drivers of the Maidstone coaches or vans to convey them from thence".  The Post Office was not unaware of the problems of delivery in this area, previously in 1828 but Mr Scott their officer found no "means, consistent with a due regard for the Revenue, by which the accommodation to the county can or might be increased".  However Ash did get the first local office in 1846; post from London arrived at 11.30 am and the box for London closed at 2.10 pm.

In 1834 the owner of land in Green Street Green tried to get a regular penny post delivery there, complaining that it was wrong letters that reached Dartford "should then be left to the control and management of a tradesman in that Town, to be sent forward when suitable to his own convenience".  The Post Office replied that as only 10 letters a day were addressed there (or 20 in the fruit and pea season), there was no justification for official deliveries.

By 1845 letters for Hartley and Longfield were sent from Dartford via a foot postman, and this was still the case in 1878.  Likewise postal services could only be obtained from Dartford and Gravesend, although Longfield had a money order and savings bank office established in 1844.  Longfield became a receiving office for letters sent via Dartford in 1891 with letters arriving at 7.45 am and 1.15pm daily.  Shortly after (1893) Longfield became a post town with direct deliveries from London at 6.45am and 1.45pm, and collections at 11.50am and 7.45pm, while the office became a sub-post office for the first time.

From 1891 Hartley's letters came via Longfield, it appears that until 1911 when an 8am delivery was instituted, that people would have to collect their post from Longfield.  Hartley finally got a sub-post office in 1914 with Herbert Noakes the first sub-postmaster.  Deliveries from Longfield were at 8am and 2.30pm, the box there was cleared at 8am, 2.15pm and 7.20pm on weekdays and 10am on Sundays.  However for money orders and telegrams you still needed to go to Longfield.

Sending a letter used to be much more expensive.  The charges were based on size and distance.  To send a letter from Dartford to London cost 2d in 1635, then 3d in 1711, 2d in 1765, 3d in 1784, 4d in 1796, 5d in 1812, and 4d in 1839 (these are about the equivalent of £1 in 1998 prices - see House of Commons Library - Inflation: The Value of the Pound 1750-1998).  Added to this for places like Hartley and Longfield, would be the cost of carriage from Dartford, usually at least another 1d. There were some expensive concessions for the Post Office, MPs' letters and newspapers were conveyed free of charge.  Thus it can be seen how the national penny post in 1840 was greatly appreciated! 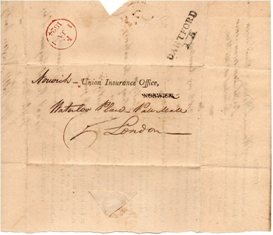 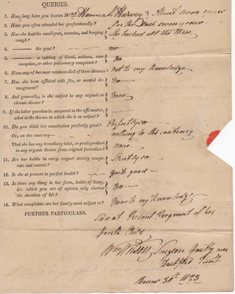 Letter sent from Hartley to London in 1823 note the mileage and the 5d postage written on the cover, just 9 years later the price would be 1d!

Letter boxes are located at (approximate date of erection in brackets): 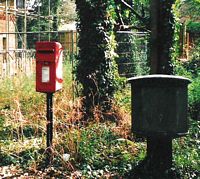 Some of the letter Boxes in Hartley