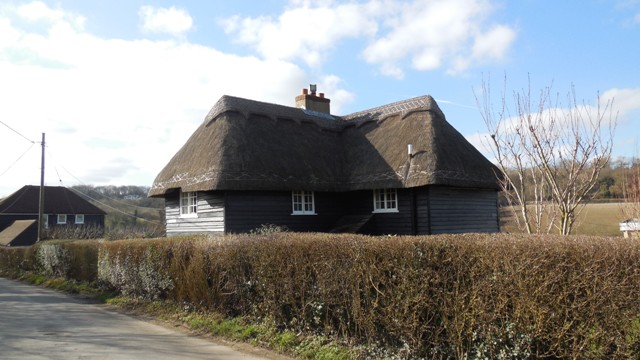 Goldsmith's Cottage lies just inside Hartley on Hartley Bottom Road; it is an "L" shaped thatched octtage dating back to the 17th century.  It is named after the Goldsmith family who owned it around 1800, but no earlier name of Goldsmiths is known. 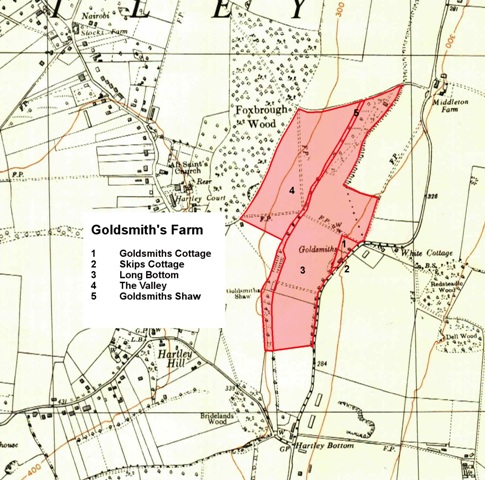 The history of Goldsmith's Cottage and the 34 acre farm which belonged to it, can be traced back to 1573, when it belonged to one Richard Wilson.  According to Hasted he left it to his brother Robert.  Four years later Robert gave the cottage to his son-in-law Thomas Acourte (alias Garner) on Thomas's marriage to his daughter Margaret.  The Gardners were an established Hartley family, but it is uncertain where they lived.  Thomas and Margaret promptly sold the estate to Michael and George Beresford.

The Beresfords were substantial landowners, who lived at Squerries Court, Westerham, although their house was later replaced by the Georgian structure you can visit today.  When Michael Beresford died in 1610, the jury at the "inquisition post mortem" listed no less than 20 different properties in Kent and Derbyshire, which belonged to him (up until 1660 such inquisitions were held when large landowners died to establish what land they owned and who was the legal heir).  As well as Goldsmiths, the Beresfords owned Gorsewood (then called "Hartley Gosse") and other land and woodland called "Great Northfield", probably roughly equivalent to hartley Wood.  Then the woods would have been commercially managed - in the early 17th century the tenant of Goldsmiths was Richard Stephens, whose trade was a collier (charcoal maker).  This industry was not just centred on the iron making areas of the Weald, many charcoal makers worked on Bromley Common for example.  At this time the annual net income of Goldsmiths was £1.

Michael's grandson Tristram sold the farm for £60 to Edmund Peckham in 1663.  The brief description given suggests that, with the exception of one orchard, the entire farm was devoted to arable.  In 1723 the Peckhams mortgaged it to the Sevenoaks solicitor Francis Austen.  He used a lot of his wealth acquired in his dealings in land to support his inpecunious nephew George, first by putting him through university and then by buying a good church living for him.  Had he not done so, George's daughter Jane might never have been able to use her literary talents.  So this is Hartley's (very tenuous!) linkwith one of England's greatest novelists.

Sometime between 1723 and 1729 Goldsmiths was acquired by James Burrow of West Kingsdown, in his will he leaves to his wife Elizabeth "all that messuage or tenement.... situate... in Hartley.... in the occupation of Edward Thorpe or his assignees, and which I lately purchased of Reginald Peckham and Edmund Peckham" (the early history above relies on theidentification of this with Goldsmiths, although other possiblities seem to be ruled out).  He also owned New House Farm and is commemorated in theimposing wall monument in the Church.  James's daughter Elizabeth Selby sold the farm to the then tenant William Goldsmith in about 1782.  It seems that the family had already sold part of the estate to Hartley Court, as Goldsmiths is henceforth described as 14 acres and in the Tithe Survey of 1844, Hartley Court had gained a couple of fields bordering the future Grange Lane, which historically are not part of the estate.

Goldsmiths then passed through a number of the Goldsmith family.  William left it to his son John in 1803, provided that his other son George would be the tenant.  John lived in Gravesend and was also a publican; he died in 1810 and left the two cottages (an early reference to Skips Cottage) and land to his daughter Mary Ann Goldsmith.

From the parish rating books, we can identify many of the 18th and 19th century tenants of Goldsmiths.

An earlier tenant of Goldsmiths had been Francis Glover (from 1762 to 1769) who was possibly a direct ancestor of the Glover family who own the house today.

Throughout the 19th century Goldsmiths was home to a number of farm labourers and thier families, none of whom seem to have lived there long, as a new family appears in each successive census.  The freehold was sold to the owners of Fairby in 1855, and ultimately came to Small Owners Ltd in 1913.  For a while Goldsmiths formed part of the Hartley Manor estate, but has since been acquired by the Glover family and now is part of Hartley Bottom Farm.

Next door to Goldsmiths is Skips Cottage, now just called "The Cottage". Its name suggests a 17th century origin, because it is named after the Kipps family. Stephen Kipps (1609) and William Kipps (1638) were both living at Hartley when they made their wills. Not so much is known about this cottage, it is first definitely referenced on the 1769 map of the area. One well known resident there was Miss Jane Foote Maxton, lady of the manor, in the 1930s. 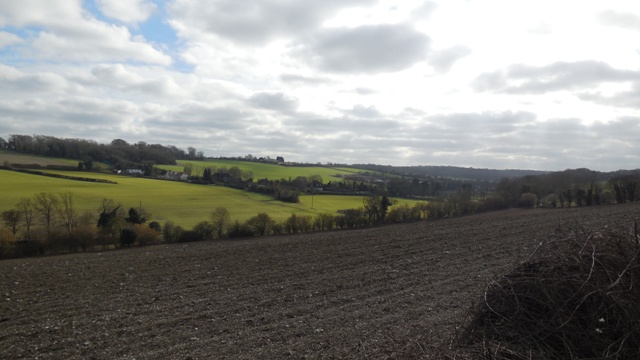 Hartley Bottom Farm is now Hartley's only farm of any size. The house has expanded from a 6 acre smallholding in 1600 to the large farm of today.