Hottsfield in 1940
Taken by a German reconaissance plane. I have highlighted Hottsfield in the centre. It stands out as it is surrounded by woodland and bisected by the railway. The five houses built by then can be clearly seen. 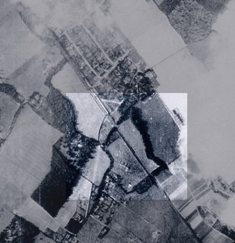 Historically Hottsfield was a separate 20 acre landholding in Hartley, although it never had a farm built on it. As it sometimes called "Holts" this is probably a clue to the origin of the name as holt is an old English word for wood.

Today Copse Side (except nos. 4-8), Hottsfield and Quaker's Close roads stand where the ancient fields of Hottsfield were. And more; for the railway bisected the holding when it was built in the 1850s. This means the following properties in Longfield were also part of Hottsfield: 29-43 and 30-44 St Mary's Way, 6 and 8 Oakwood Rise and 1-13 (odd) Dene Walk. Indeed the boundary between the ecclesiastical parishes of Hartley and Longfield still follows the ancient line of Hottsfield.

Ancient Hottsfield superimposed on a modern map
The base map is a similar date to the German photograph above.

It is very probable, given the similarity in descriptions, that the 24 acres in Hartley purchased by Henry Catlyn in 1607 included Hottsfield. The sellers were sisters Anne Carleton and Frances Harrison and their husbands Dudley Carleton and Richard Harrison. They were the daughters of George Garrard and granddaughters of William Garrard (d 1571) of Sittingbourne, a former Lord Mayor of London. 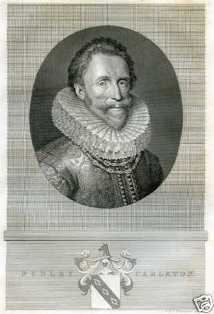 However the first time we meet Hottsfield for sure is in 1619 when the land was sold by John Howell and his wife Jane Howell, to Thomas Burrow of Longfield. The next time Hottsfield would be sold would not be until 1846. All that time the land remained in the hands of members of the family, often but not always along with New House Farm, which the family also owned.

Thomas Burrowe left Hottsfield to his son Thomas in 1656: "I give and bequeath..... my freehold lands and woods adjoining a little above my mansion house called or known by the name of Hodds, lying in Hartley, paying to my wife half the yearly value of the said Hodds during her natural life. And after the death of the said mother, all the said lands and tenements to my said son Thomas and to his heirs forever.". Thomas junior was childless, so he left Hottsfield in 1692 to his eldest niece Margaret (born Hartley 1679). She was the daughter of Thomas's brother James Burrowe, the owner of New House Farm.

Margaret brought Hottsfield to her husband William Jewell when they married. He was the son of a solicitor who lived in Sevenoaks. William died in 1730, leaving Hottfield ultimately to their son William Jewell. His will mentions at "widow Vickers" was the tenant.

William Jewell junior died in 1762 and left the land to his wife Hester for the remainder of her life. She lived another 20 years, so in 1782 under the terms of his will his first cousin Elizabeth Selby became the owner. As she had no living children, once again Hottsfield in 1788 passed to a cousin, Sarah Effield Chapman, who a couple of months later married the Dartford brewer John Tasker at Wilmington. For many years their tenant was Francis Treadwell of Fairby Farm.

Sarah Effield Tasker outlived her husband and after her death in 1845, Hottsfield descended to two of her daughters, Sarah and Mary. They sold the land to Thomas Bradley in 1846. Thus the land passed out of the Burrowes family after nearly 250 years.

After Thomas Bradley died in 1864, Hottsfield descended to Thomas Holmes Forrest (1803-1875). He was followed by William Sidney Forrest (1820-1915) and Eliza Frances Forbes, nee Forrest (b 1842). By now the holding only included the 11 acres on the Hartley side of the railway. What happened to the Longfield side of the holding is uncertain, when the land was sold in 1955 to develop St Mary's Way, Oakwood Rise and Dene Walk, the owners did not have title deeds, so claimed squatter's rights over the land.

In 1922 Eliza sold Hottsfield to George Day of North Ash Farm for £330. He sold the part of the plot which later became Quakers Close to Miss Edith Capper in 1923. She built the house called The Pales. Another parcel was sold to Robert and Barbara Harker in 1924 and 1930, they built a brick bungalow called "Copse Side" which was later demolished to make way for the road of that name. This left the land which became the road Hottsfield. In 1934 he got planning permission to build Fingehl, Hammonds and The Cottage. The remaining 4 acres was used for agriculture until 1945 when Mr Day's executors sold it for £725. The rest of Hottsfield road was later built on this land.

This is the long promised article about Hottsfield.

Hottsfield was a 20 acre or so holding which sloped downwards towards Longfield on the eastern side of Hoselands Hill. The earliest reference to it is in 1607. But from 1619 to the end of farming here in 1945, Hottsfield was owned by just three families.