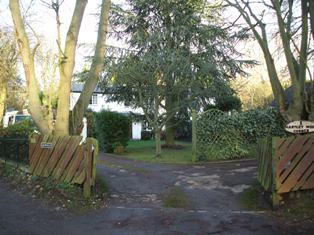 In its later history, Hartley Wood Corner was a pair of farm cottages to one of the larger farms. But recent research has proved that Hartley Wood Corner was once a farm in its own right, which would have encompassed the land bounded by Spring-croft, Manor Drive and Hartley Wood, and probably the future site of Southdown in Manor Drive. The present pair of brick and slate cottages were built in the middle of the last century. Originally they were "two up, two down", but both have been added to in more recent years. Since early days there has been a barn here, the present barn has been dated to the late 1700s. There is also a well, although in later years water was piped from Hartley Court.

Hartley Wood Corner was probably not one of Hartley's ancient farms. It appears that it was created partly out of Stocks Farm and partly by acquiring neighbouring land. The first time we meet Hartley Wood Corner itself is in 1642, when it was leased together with Stocks Farm by Alexander Skeath from John Edwards of Ridley. Some disagreement arose between these two gentlemen, for a few months later the Centre for Kentish Studies has an arbitration agreement to resolve "all discords, variance, strifes, etc (between them). ... from the beginning of the world until the day of the (present) date ...". The upshot was that Mr Skeath could remain as tenant for another 10 months. It is difficult to know which house was which in the agreement, but it was probably the one house, a share of a barn and a field and orchard in the occupation of John Gardener.

John Edwards added to the Hartley Wood Corner holding by buying 10 acres of land from Mrs Bennett Walter, probably in 1657 when she was disposing of the family's other estates in Hartley in accordance with her husband John Walter's will. . John Edwards had a particular reason for doing this because in the following year he gave Hartley Wood Corner to his elder son Peter, who was born at Ridley in 1636 and thus had just come of age. The deed describes the farm as "all that messuage or tenement with a barn and 5 pieces of arable land containing 16 acres and 3 pieces of wood containing 2 acres".

We do not know what happened to Peter, but the farm was back in his father's hands in 1660. In that year John Edwards and Denise his wife sold Hartley Wood Corner to Richard Boycott of Horton Kirby. The holding was now described as being 12 acres in size, and later deeds would say it was 10½ acres, but it may well have been always the same extent.

Richard Boycott had two children Mary (b 1654) and Elizabeth (b 1658). He died in 1703. One of his daughters married John Young (1643-1713), the owner of Fairby Farm. When John Young wrote his will in January 1705 he said he had bought Hartley Wood Corner of his mother in law Mary Boycott. This must have been in 1703-1705. John left Fairby to his older son Thomas. To his younger son John, he left three smaller Hartley holdings - Hartley Cottage, Forge Cottage and Hartley Wood Corner. 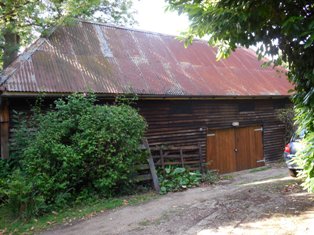 Thereafter, like much of Hartley, the house's history is linked to that of Hartley Court, finally coming into the hands of Smallowners Limited in 1913. The 19th century brought important changes, for in the middle of the century the house was rebuilt as a pair of farm labourer's cottages, and the tenants in the censuses of 1841-91 are mostly farm labourers, but in 1891 the tenants were George Hollands, gamekeeper, and his family; and Walter Apps, bailiff, and wife. At the time of the previous census in 1881, the Wharton family lived there, and Mrs Phillis Wharton's profession was laundress - one of the few cases a female profession is given in the censuses of the last century for Hartley.

A good description of the cottages is given in the 1901 sale particulars of the Hartley Court Estate: "Two capital brick and slated cottages, each with three rooms and wash-house. Brick, flint and tiled oast house (used for storage). Pheasant house, hen house, open shed. New brick and tiled dairy with slate shelves and sink. A young orchard and timbered and thatched open shed and towel house." The oast house was demolished soon after, although its outline can still be seen. By 1901 hop production at Hartley had virtually ceased (in the agricultural returns of 1897, only 3 acres were devoted to hops in the whole of Hartley). Apparently the hops were grown in the field behind the house, to be replaced by an orchard of which a few cherry trees still survive. Originally the barn was thatched, but this was replaced with the corrugated iron roof about sixty years ago, more recently it has been re-stored.

For much of this century, no. 1 has been occupied by the Boorman family, who came to Hartley in 1926. Percy Boorman was head gardener at Hartley Manor with a staff of two. Previously he had been head gardener at Kingsgate near Whitstable, but had to move when the owners there sold up. Amongst others he was responsible for the kitchen garden, fruit trees, potting shed and the lawns and grass tennis courts, but he missed the greenhouses of Kingsgate. He continued working there until the age of 80. His daughter Nellie tells me that she loved living there, and re-members the owls at night. No. 2 was bought by Charles and Maud Harris of Bex-leyheath in about 1921, they were friends of the Marsh family who later bought the land opposite. They moved in about 1930 and then the MacDonald family lived there a few years. At the time of the tithe returns in 1936, a Mr Gayes of Chiswick owned No. 2. He seems to have let it to a series of tenants, although one member of the family was living here in 1940. Recently the barn became the venue for a production of "Readings from Shakespeare" by Roy Boutcher.

I am most grateful for all the help I have received from the following people in this article: Dora Prime, Margaret Gilbert, Nellie Marsh and the Paternoster family, who kindly lent me Danny Paternoster's notes on the history of his house. 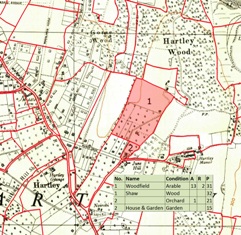 This is an update of the 2008 version of the article. I have added a lot of new information which has since come to light. This information has helped me to correct the history between 1660 and 1800, where I had previously believed some Stocks Farm deeds with vague property descriptions had belonged to neighbouring Hartley Wood Corner.

This article traces the history of Hartley Wood Corner, a 13 acre farm off Manor Drive.  Created out of Stocks Farm and the purchase of 10 additional acres in the 17th century, it was eventually absorbed into a much larger holding in 1810.  The pair of cottages seen today were built in the 19th century.