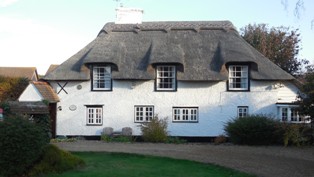 This delightful grade II listed thatched house lies in Church Road near the junction with Ash Road. According to the English Heritage lister's report, it is a 17th century or earlier timber framed building with modern restorations and additions.

The house has only been called so for about the last hundred years. Originally it was called "Hayes" (from 'haia', an Old English word for enclosure) and it was the centre of a small compact farm of 26 acres, extending over the modern roads of Old Downs and Larksfield (western part), as well as most of Church Road beyond Gresham Avenue.

A list of tax payers in 1379/80 mentions a Robert atte Hay, who can be presumed to be the earliest known occupier of Woodins (he is probably mentioned in the 1373 tax roll, but if so, his surname is misspelled as 'Hacche').

John Cotyer, who died in 1452 was by then the owner. In his will he leaves Hayes to his wife Christine for 16 years, and after that by a settlement created by the will. It was first of all to go to his son Thomas, but if Thomas died childless, then it would descend to his other son William. If William died childless then the farm was to be sold and the money given to charity. His will also left 40d for repairs to the Church; and he also stipulated he was to be buried on the south side of the Church (medieval people believed it was unlucky to be buried on the north side of the Church where the Church cast its shadow).

Thomas Cotyer is mentioned in a 1449 court case when the Prior of Rochester Priory sued him for an alleged debt of £40. He was married to Rose, heiress daughter of another Hartley landowner, John Paris. John's will of 1451 created a settlement whereby he left all his unnamed lands in Hartley to Rose, and after Rose to her two daughters. If they died childless then the land was to be sold for charity.

Thomas Cotyer died in 1473. In his will he left his land in Hartley to Rose, his wife. The descent of the farm is a little uncertain after her. It was sold in 1495 to John Sedley of Southfleet, a senior government official as Auditor of the Exchequer. The surviving information doesn't name the seller, but Mr Sedley felt it prudent to get the descendants of John Cotyer's executors from 1452 to sign a form releasing any interest they had in the property.

It seems Mr Sedley did not retain Woodins for long. It is not mentioned in his 1532 will and by 1541 John Overy of Fairby was the owner of Woodins. It then passed through three generations of the Overys until the Overy family estate was divided between brothers John and Richard in 1604 (in this deed Platt Field is called Morrells Croft, and Hays Field is called Poores Croft).

The Time of the Vicars

Richard Overy and Parnell his wife sold it in 1617 to Richard and Jane Barham. At this time Woodins consisted of a house, a barn, an orchard, 16 acres of arable land, 8 acres of pasture and acres of wood. From Richard it probably descended to his daughter Frances (1608-1641) and her husband Reverend Edward Simson or Simpson (1578-1651, see picture), Rector of Barham in Kent and a noted religious author in his day. 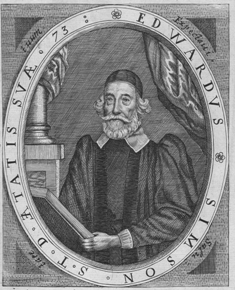 Edward and Frances Simson had a daughter in 1635 named Jane. She married an-other clergyman Ezerell Tonge (1621-1680) in 1649. The farm would have either come to them on Edward's death or possibly as part of a marriage settlement. Ez-erell Tonge led a very full life, he lost his church, St Mary Staining in the Great Fire of London, and then was chaplain to the British garrison at Tangier. He is best known for being an ally of Titus Oates, who concocted the "Popish Plot" in 1678, although historians today believe he was duped by Oates too.

The Tonges didn't hold onto it for long, for they sold Woodins in 1656 to yet another clergyman, this time George Eves, the Rector of Hartley.

George left the farm to his son Geoffrey in 1667, his will also included bequests of 10/- to the poor of Hartley, and he also remembered the poor of his native Croydon. Rev Eves also owned land at Southfleet, East Kent and Hertfordshire. He did not live at Woodins, rather leasing it to one Leonard Carrier. Mr Carrier augmented his landholding by leasing another 60 acres of land in Fawkham and Hartley from the Walter family (this included the future sites of Old Downs House and Downs Valley).

Geoffrey Eves sold the Hartley and Southfleet lands in 1706 to Richard Taylor (1655 - 1712), it will come as no surprise to readers that he too was a clergyman, the vicar of Darenth. He was succeeded by his son John Taylor (1691 - 1758), also vicar of Darenth but in addition rector of Fawkham. In his will John left Woodins to his eld-est daughter Jane, he mentions that as well as the house there was a barn and sta-ble too. At some point her brother Finch Taylor (1728 - 1771) became the owner. He left his estate at Hartley, Darenth, Stone and Sutton at Hone to his cousins Judith Searle and John Page. By 1782 John Page had bought out Judith as owner of Woodins. He died in 1800, leaving the farm in his will to his son James.

The Taylors and Pages also let out the farm; from at least 1744 the Best family of Middle Farm were the tenants. In 1790 the tenancy was vacant but two years later Thomas (d 1801) and Ann Wilson (1764 - 1854) with their 4 children had taken up residence. It appears that Ann later married William Woodin (1774 - 1858). The Woodins were an old Hartley family, his father and grandfather had lived for many years at Goldsmiths Cottage at Hartley Bottom. It is of course William Woodin that the house is named after, a fairly common practice to name a house after its owner; Rev Bancks tells us that the road at this point was called "Woodins Corner" too.

In April 1853 William and Ann were in their eighties, and they lived with Ann's son William (1800 - 1875), and William's neice Hariett Partridge (b1815). The farm em-ployed one other person and the annual rent was £25. At that time they were sub-jected to a three hour ordeal at the hands of robbers, who seemed to be very well informed about the household as this newspaper report sets out.

"About three weeks before a lone farm house in the parish of Hartley was robbed. The inmates consisted of an old lady and gentleman, very helpless, a son about fifty, and a niece. The son had been tending a sick cow till twelve o'clock, and was scarcely in bed, when the door was tried by some parties, and on the son looking out a stone was thrown at him, which he avoided. He went down stairs and told them if they came in at the window as they were attempting, he would knock them down. They then burst the door in bodily, and he escaped up stairs. Four men then entered the house with blackened faces, burst the stairfoot door open, and proceeded to the old man's room, armed with a gun and two hatches. They threatened to dash the old man's brains out if he did not tell them where his money was. He would not. They then put the candle under the bed and threatened to burn him and his house. Still he would not tell them. The niece fearing for the safety of the old couple, came to their room and gave them a purse. They then told them they kept two purses, and demanded the other. This she was obliged to give up, the two purses containing £12. After ransacking every drawer, they returned down stairs and regaled themselves plentifully, leaving the house between three and four, taking with them some hams; and although an experienced officer is convinced there were seven in the gang, no clue has yet been obtained by which any of them may be detected." (Canterbury Journal 14 May 1853)

This was not the first burglary at the property. In 1801 William Wells was sentenced to 12 months in the house of correction for breaking in and stealing bread and pork from Ann's father Thomas (Canterbury Journal 4.8.1801).

Ann's son William Wilson inherited the tenancy in 1858. At the end of the last century the tenant was Charles Taylor, who was a shepherd, and indeed the house was often also called "Shepherd's Cottage".

James Page died in 1853 and his executors sold the farm for £1,350 to James Tho-mas Smith of Sun Cottages, New Cross. At the time the farm was nearly all arable, with just 1½ acres of meadow. This was his first purchase in Hartley but by no means his last. When he sold his lands to James Timmins Chance in 1899, he owned Fairby, Mintmakers, Middle Farm, Stocks Farm and other land as well as Woodins.

Woodins itself and most of the land was bought by Payne Trapps & Co on 1 No-vember 1905. They sold off the land in parcels, slightly worryingly the house is bi-sected by two plots! Their purchase almost marks the end of Woodins as a working farm, however such of the land as was then undeveloped (no longer part of Woodins) enjoyed a brief Indian Summer in the 1940s, when the land was ploughed up to boost food production.

One field name has been preserved in modern Hartley - Wellfield, although in fact the field of that name only just reached the back gardens of some of the houses on the south side of Wellfield Road. 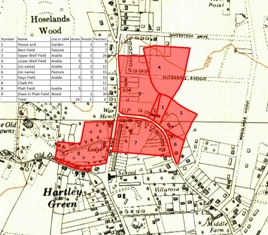 Read about the history of Woodins, a thatched cottage in Church Road, Hartley, near the shops at the junction of Church Road and Ash Road. The house may be c17th but the holding is much older, dating back to at least the c14th.