In Kent there are 3 types of Fire Stations:

Looking at the distribution of fire stations on the map of Kent [1], it does seem to be the case that the Longfield - Hartley - New Ash Green area is underprovided for and others have reached that conclusion in the past.  Kent County Council purchased a site at Butlers Place, New Ash Green in 1970, which they transferred to the Fire Authority in 1992 [2].  But thus far any plans are in abeyance and Kent Fire and Rescue Service have confirmed that they have no plans to build any new stations in the county.

Fire protection in Kent will cost £63.6 million in 2006/7, which appears as a separate item on council tax bills.  Of this 80% is spent on operations, 18% on fire prevention and 2% on central administration. [3]

The Work of the Fire Brigade

The Kent and Medway Fire Authority have kindly supplied figures for 2003-2005.  They show the Fire Brigade has been called out to Hartley on average 30 times a year.  Over the past 3 years there have been 64 fires in all, 9 of which were dwellings while 25 were rubbish fires.

The number of deliberate fires is high at 2/3rds of all fires, but this is exactly in line with the county average.  Mercifully none involved dwellings.

It is also encouraging to note that there has only been one malicious false alarm in the last 3 years.  The "Good Intent" false alarms are divided into: By Person (11), Mechanical (4), Electrical (2)

Dartford is by far the most important fire station when it comes to answering calls from Hartley.  The figures below add up to more than the number of incidents above because more than one appliance attended in some cases:

Countywide the Fire Brigade's target (which they achieve) is to attend 91.2% of fires within 10 minutes.  However in Hartley this figure is only 15%.  This rises to 85% within 15 minutes and 100% within 20 minutes.  The response times for the 91 non-Road Traffic Collision incidents in the last 3 years, are set out in the table below.

Anciently fire fighting was left up to parishes or even individuals.  Reverend Bancks tells us of a fires at the Church in 1855 and Hartley Court in 1852, where buckets were passed by chain from ponds to the fire [4].  And there is something very Hardyesque in the barrel of beer given to people who put out a fire in c19th Horton Kirby [5].

Some early call out records of the Dartford Fire Brigade are kept in Dartford Library and on occasion they were called out to our area.  The costs for extinguishing a fire were quite high and were met by the owner. 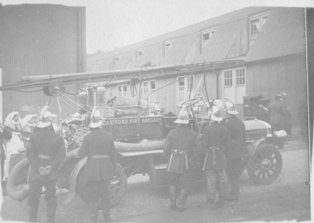 Dartford Fire Brigade at the Southern Hospital, about 1910

Many villages maintained their own fire brigades.  Horton Kirby has existed since at least 1905, and Longfield already had a village brigade in the first decade of the 20th century.

The first evidence of local authority involvement in Hartley came as late as 1926, when Dartford Rural District Council installed two hydrants in Ash Road.  Four years later Hartley Parish Meeting erected public fire extinguishers at strategic points.  In 1931 the parish meeting did not want to subscribe to the new Dartford RDC brigade at Horton Kirby, the cost of a rate of ¾d in the pound was thought excessive!  However many local fires were attended by the Dartford Borough Council brigade.  The downside of this was that people who called out the brigade were charged - as the owner of Old Downs found out, when billed £15 to put out a haystack fire in 1936 [6].  An act of 1938 set up fire brigades on the rates [7]  and charges were abolished.  The fire service was nationalised during the war, when Kent County Council ran the service from Dartford with sub-stations at Horton Kirby and Swanley.  Stations at Wilmington, Eynsford and Stone were closed.  A number of additional hydrants were installed in 1948-9 to ensure all but one property could be reached by hose from a hydrant.