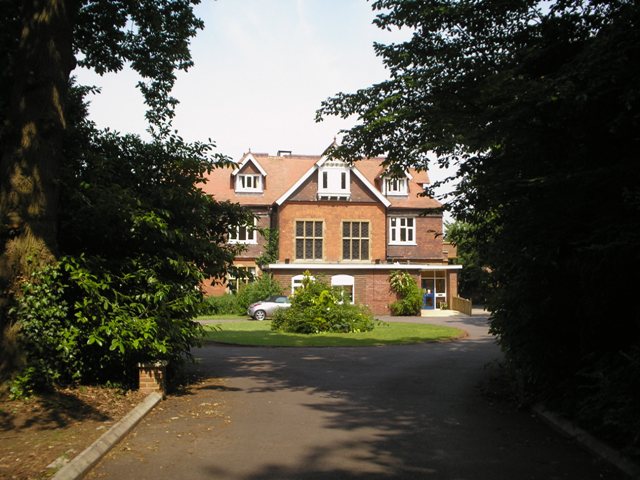 This land has been called Old Downs since at least the 16th century, when it was owned by the Walters of Pennis House, Fawkham, but the origin of the name is unclear. Bennett Walter sold it to the Young family of Fairby in 1657. Then the land was a mixture of arable and woodland, and was part of a block of land north of Castle Hill (then called "Hartley Lane") and west of Ash Road, which was farmed by Leonard Carrier, the tenant of Woodins. It appears the 20 acres of land which was to form Old Downs house was sold by Fairby farm in about 1876 to Col. Joseph Hartley of Leeds. But we best leave the description of the early history of the house to Col Hartley himself, who embedded a metal plaque in the wall with a map and the following text:

"By the goodness and mercy of God. Joseph Hartley. Retired Lieut. Col of the Prince of Wales' own West Yorkshire Regiment. Doctor of Law of the University of Cambridge, Barrister at Law of the Inner Temple. Justice of the Peace for the county of Kent and Deputy Lieut. and Justice of the Peace for the West Riding of the county of York. FRSL&S. Being at that time 60 years old. Was enabled to build this house on his freehold land in the parish of Hartley and in the adjoining parish of Fawkham. Of which land a plan is subjoined. This house marked "A" on the said plan was commenced on the 21st of June, AD 1887 (The day of the celebration of the jubilee of Her most gracious majesty Victoria, Queen of Great Britain, and Ireland and Empress of India) and cost including all charges about £6,000.

His family on the 21st June 1887 consisted of himself born May 4th 1827 and his wife Lucy Adnam Hartley (only child of George Lyford Salter of Exeter) and his only son Salter Saint-George John Hartley, born June 23rd 1867 at Stavely in Yorkshire. A student at Saint John's College Oxford. And of his only daughter Lucy Josephine Hartley, born 18th November 1869 at Horbury in Yorkshire, a student at Cheltenham College (Ladies) Gloucestershire. Of which for persons, portraits are appended.

The quantity of land included in the plan is 23 acres, of which about 4 are in Fawkham. There are two copies of this writing deposited, one in the wall near front door, and the other in the foundations at the north west corner." 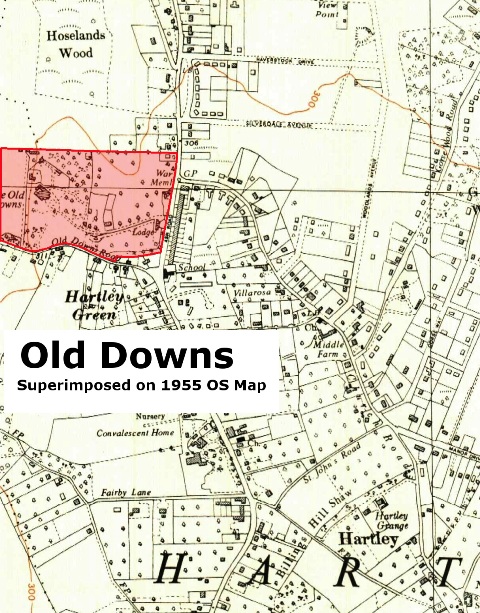 The Dartford Chronicle of 15 November 1879 carried an advert for the sale of 3 haystacks there, prospective purchasers were asked to contact the gardener Mr Jessup. He lived at the gardener's house with his wife Mary and 4 children. By 1911 the Elliott family were gardeners at Old Downs, living in the lodge (1 Old Downs).

At the time of the 1891 census Joseph and his wife were living there with their daughter Lucy and 5 servants. A Percival Smith is recorded as a visitor, and it was he who married Lucy in 1895. They changed their name to Smith-Hartley in 1904, after the death of Lucy's only brother, when they inherited Old Downs.

Old Downs was clearly the favourite of the Valuation Office surveyor, when he visited Hartley in 1911. It possessed mod cons of Electric Light powered by an 11HP electric lighting plant, dynamo and battery, and hot water radiators throughout the house. It boasted 6 "good" attic bedrooms, 4 other bedrooms, dressing rooms, bathroom, morning and dining rooms, drawing room and conservatory, as well as the kitchen, servants' hall etc. To sum up the surveyor said it was a "very substantial and exceptionally well built" house. At the time the Smith-Hartleys had leased it to Mr E Cresswell Baker for 7 years at an annual rent of £220; the whole estate was valued at £6,084.

Mr John Reynolds Stickland bought the house in about 1927 and in the late 1930s built Kaye Cottage (18 Old Downs) in the grounds for his family. He ran a gentleman's cramming school. Charles Ellerby wrote in the Hart (Jan 1984) that the Crown Prince of Japan was once a pupil there, and that one of the teachers was Gilbert Harding, who later won fame as a 1950s television and radio celebrity in shows like "What's my Line?" There was also some agricultural element to the estate. In 1941 he had 12 acres of permanent grassland, 8 cows, 8 pigs, 1 goat, 18 ducks and 159 chickens. The War Agricultural Inspector was generally happy but wished he would plough some of the land for arable. Mr Stickland wrote on one return "this holding is really a private residence and the animals and birds kept only as a sideline to my real business. One man (recorded as an agricultural labourer) is partly employed as 'boots' etc. Mr and Mrs Stickland lost two sons in the war - George, a keen athlete, who died in a flying accident in 1941 and Gordon, a bandleader, who died in Italy in 1944. Their other son John, was a captain and served in Malta from 1940 to 1944. He won the MC in 1942, the citation read "This officer was in command of a heavy anti-aircraft gun position which was dive-bombed ten times within a fortnight. His personal determination and complete disregard for his own safety resulted in magnificent work by the troops under his command. His courage and leadership have instilled in the personnel under his command a dogged courage and devotion to duty"

Kent County Council bought the house in 1950 and turned it into a retirement home, now in private ownership. They did not buy all the land, for part of it appears to have been purchased by Mr Billings, who applied for planning permission on most of the surrounding land from Ash Road to Fawkham Valley Road. This was refused but he was permitted to build Old Downs, which was completed in 1956 - the residents successfully fought off an attempt by the Council to call the road "Old Downs Close". More recently the eight new bungalows of Sandshaw Court with their excellent views of the valley have been added inside the grounds.

Old Downs has figured in village life. Gladys Howard wrote in the Hart in January 1984 that the Women's Institute was started in a barn at Old Downs, lend to them by Mrs Baldwin, sister of Mrs Keen. Later when the house was sold they moved to the room above the garage. The Darby and Joan Club met here in the 1950s. Mrs Stickland hosted a Conservative Fete here in 1950, which the Gravesend Reporter said was an ideal location for such an event and in the 1960s the village fete was held here. 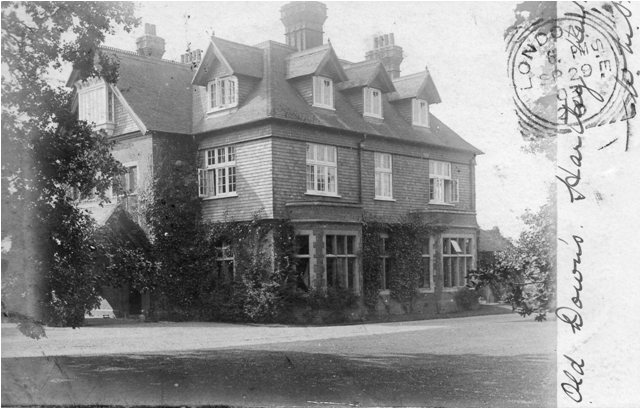 Completed in 1887, Old Downs is one of the newer "old houses" of Hartley. Read about how it has been a family home, a school and now a nursing home.