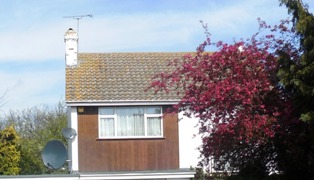 Hartley's terrestrial television signal comes from the Crystal Palace transmitter. This 700 foot (219m) tower dominates the skyline for miles in South London. It is one of the most powerful in the country and first broadcast on 28 March 1956. This explains why the Dartford area receives the London local news programmes, although those with satellite can receive the Kent local news.

Some signal can also be received from Bluebell Hill transmitter in the Medway Towns as well as Sudbury (Suffolk) and Rouncefall (Essex). But this may involve altering the orientation of the aerial.

New Ash Green had an alternative method of receiving television called rediffusion, which was set up about 1967 (Planning application 67/303). Instead of every house having an aerial, there is one central aerial with TV being received via cable. Indeed there were covenants on the houses banning people from putting up aerials. However by 2010 the operator had withdrawn and the Village Association had said there was no alterative but to allow people to put up aerials and dishes (Source 2010 AGM minutes).

High definition television (405 lines) began in the UK from Alexandra Palace on 2 November 1936. Hartley would have been within its 35 mile radius, but it is unlikely that anyone here owned a television set before the war. 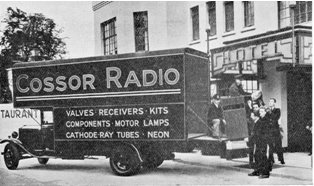 The first ever television to be sold being delivered to the Brent Bridge Hotel, Hendon in October 1936. Note the separate delivery of the cathode ray tube and the large number of people needed to carry it!

Crystal Palace boasted a number of firsts, including colour television in 1967, stereo broacasting in 1986 and High Definition television in 2009. It was switched to digital only broadcasting on 19 April 2012 with a spectacular light show. 405 line transmission ended in 1985.

Most people still watch live TV via a traditional television set, however according to Ofcom over 20 percent of viewers now watch television via tablets or smartphones.

Competition for the scarse airwaves is intense and it may be that the bandwidth currently used by Freeview will one day be given to mobile broadband users. Recently Freeview has felt compelled to launch a vigorous defence of the service.

The main alternative to terrestrial broadcasting is satellite television. Signals broadcast by a satellite are picked up by a dish on the roof, and converted into pictures by a receiver.

Satellite was available in the UK from 1983, but unless you had a massive dish it was only available to cable households. Sky launched direct television via the Astra Satellite on 5 February 1989.

An alternative to Sky is Freesat. This service offers over 200 channels free of charge. All the customer has to do is to have a dish and a freesat box.

According to Ofcom statistics about 9 million homes in the UK have paid for satellite, and a further 2 million have Freesat.

We may live in a television age, but radio is still immensely popular. OFCOM estimate that there are 66-81 million radios in the home, as well as 35 million in cars. Another 5.6 million are sold each year.

The first radio broadcasts began from the 2LO studio in The Strand, London on 14 November 1922. Radio was instantly popular, if very expensive. H Myers of Church Road advertised radio sets between £5 and £50 in March 1924 (£5 then is the equivalent of about £170 today!). One of the earliest Hartley people to appear on radio was June Worsley, who played piano on Children's Hour in October 1936.

Our area saw a notable first, when the nation's inaugural VHF transmitter opened at Wrotham on 2 May 1955. Wrotham was also the first to transmit in stereo in the UK on 17 April 1966. Many of our popular FM stations are transmitted from Wrotham including Radio 1-4 and Classic FM. Most of the commercial FM stations are received from the Croydon transmitter, including Capital FM, LBC, Magic FM, Kiss and Heart. 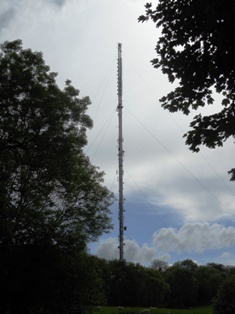 Long wave and medium wave require far fewer transmitters. Only 3 transmitters are needed to broadcast Radio 4 on 198 KHZ LW in the whole of the UK, the nearest being at Droitwich in the Midlands. The Radio 5 Live signal at 693KHz also comes from Droitwich.

DAB (Digital Audio Broadcasting) has been much slower to take off than digital TV. At June 2013 only 33.9% of listening was on digital platforms, which was made up of 22% DAB radios and 11.9% other (like digital TV or the internet. Although in the same period 45.7% of people owned sets.

In 2010 the government said when listening figures reached 50% they would then try to force everyone to use DAB.

Users of DAB say they like the quality of sound and range of stations. The advantage of DAB for broadcasters and regulators is that it can broadcast a multiplex of stations over a narrow waveband. If they could switch off analogue, then the bandwidth they use could be sold off for other uses.

Like analogue radio, much of our DAB signal comes from Wrotham, which began on 3 December 2010.

One notable exception is BBC Radio Kent, which is broadcast from the Bluebell Hill transmitter.

This article summarises some of the main the radio and television options available locally.