Hartley is lucky that although the centre is increasingly urbanised it is still surrounded by a large amount of greenspace. The government's 'Generalised Land Use Database'. Within the 4 areas it splits the ward of Hartley and Hodsoll Street into the amount of greenspace (excluding house gardens) is 9% (Wellfield Estate), 29% (East Hartley), 49% (West Hartley), 89% (South Hartley and Hodsoll Street). A significant part of that greenspace are Hartley's many woodlands

Many local names, including that of Hartley itself suggests land won by our Anglo-Saxon ancestors from woodland. In 1086 Hartley was said to have woods for 10 pigs, unfortunately this can't be converted easily into acres, because this depends on the number of large oak trees yielding acorns that the wood contained. It is probable much local woodland is later in date. 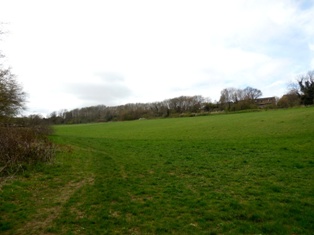 Would the 13th century resident Alaric Veysin be surprised to find his name still rememebered in both the woodland and the housing estate beside it? In 1288 he is mentioned as having bought 1¼ acres of land, the exact extent of the wood in modern times. Then only ¼ acre was actual wood. It is mentioned in a c15th will as Veyseys Grove.

The developers of New Ash Green kept the woodland and built the neighbourhood of the same name around it. The wood is now on the edge of public parkland (see photo).

The wood is owned by the New Ash Green Village Association Limited. 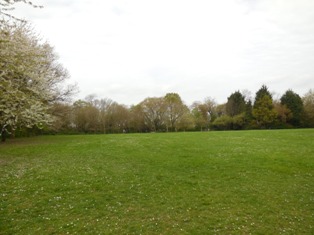 Billings Hill Shaw is a strip of woodland between Hartley Grange and the modern housing estate of the same name. Now the woodland only goes as far as Grange Way, but a fragment of the southern end remains in woodland behind the modern Tates Orchard.

Shaw is a common place name element in Kent. It comes from the Old English word 'sceaga' (pronounced sheaya) for small wood. Locally it particularly means a strip of woodland forming the border of a field, and indeed Billings Hill Shaw marks the boundary of the land belonging to Hartley Court. The name is a bit of a mystery, the first mention we have is in 1908.

The wood that is known as Billings Hill Shaw today is owned by Hartley Parish Council. 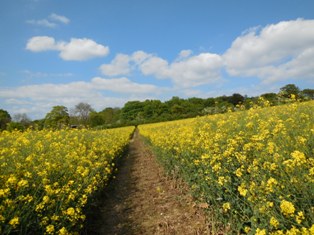 A small wood that forms much of the southern boundary of the Bramblefield Estate. The wood is in private ownership, which is divided between Bramblings Residential Home and one of the properties in Fawkham Valley Road. Public access is restricted to a footpath which runs from Fawkham Valley Road to Longfield Station, which comes out of the wood by Russell Court Nursing Home. 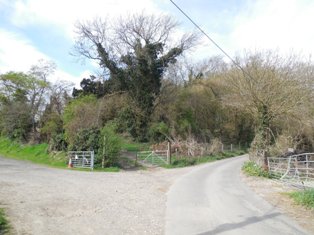 Bridelands Wood is a small (2 acres) privately owned wood with no public access apart from a footpath which skirts the edge. It is on the south side of Hartley Hill, near Hartley Car Breakers.

The name is of some antiquity, for in 1392 a field named 'Bridon' is mentioned in a survey. The 'don' element doubtless is based on the Old English word for 'hill', as it does in placenames like the North Downs. The first element is less certain. 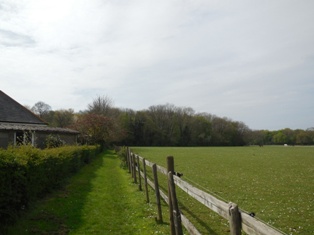 Historically part of Ash parish, but since 1955 part of Hartley, Chapelwood is a small privately owned wood near the junction of Chapelwood Road and Ash Road. A footpath runs through it from Chapelwood Road to the Black Lion and Pennis House, Fawkham. It is mostly hornbeam coppice with oak and beech standards. 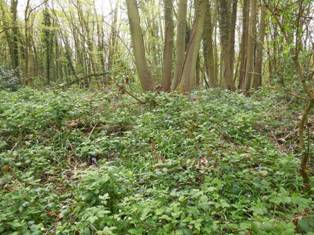 The remains of the ancient manor of Scotgrove have been found in the woods. The manor house had its own chapel which gives the wood its name. The earthworks of the manor house are still partially visible. 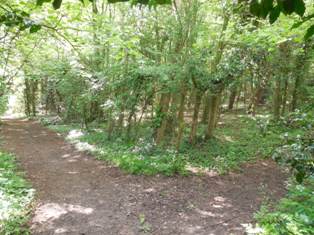 There is a small wood at the end of Fairby Lane, which also forms part of the western boundary of Hartley Country Club. In the 19th century it was called Long Shaw, but that name is largely lost and the wood tends to have no name now. Two footpaths pass through the wood, one goes to the Corinthians Sports Club while the other goes to the bottom of Castle Hill just by the entrance to the Fawkham Church meadow. 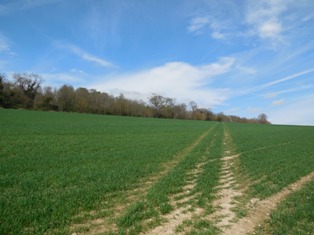 Although spelled "Foxborough" on the Ordnance Survey map, this 26 acre wood is more properly pronounced "Foxbury", which is the use of older residents and confirmed by its first known spelling.  The name is probably ancient, but not mentioned in documents until 1822.  Its name is probably a joining of "Fox" (fox) and "Borough" (from the old English beorg).  Beorgs are usually rounded hills, but as so often with place names there are other possibilities for the derivation of the name. 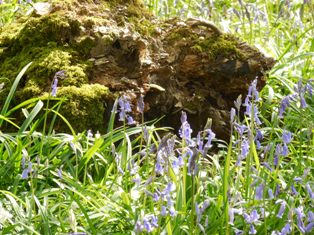 The best time to see this wood is in spring for the magnificent blue carpet of bluebells. The trees are mostly hornbeam coppice but with oak and beech standards also. A survey has identified no fewer than 27 species of wild flower. With the exception of about 1 acre by Hartley Court Cottage, it is in private ownership, but the management in conjunction with the Forestry Authority permits walking access from the public footpath. In the 1930s Grange Lane was called Foxborough Lane, Grange Lane is a misnomer - an incorrect reading of a map as it leads to Orange Hill. The land owned by the parish council was given to them many years ago to become a new cemetery, but proved to be an unsuitable site. 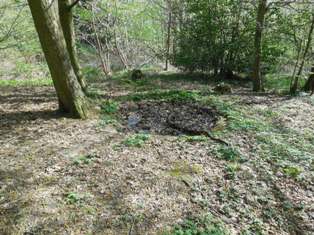 The wood has been regularly managed through coppicing. Another man-made feature to be found are 'dew ponds'. These are places for water to collect for farm animals in areas such as Hartley with no rivers or springs. 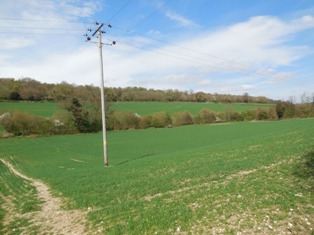 Small strip of woodland in Hartley Bottom, part of Hartley Bottom Farm. It is named after the Goldsmith family who lived in Hartley about 1800 and who also are commemorated in the name of nearby Goldsmith's Cottage. It is privately owned but a footpath does cross it at one point near the pumping station. 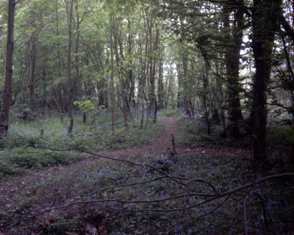 It is thanks to the efforts of local residents in the 1970s that there is any wood here at all, because it was originally planned to cover it in housing. As it is Gorsewood is a fraction of its former size, sandwiched as it is between Caxton Close and Porchester Close on one side, and Gorsewood Road on the other. It is now owned by Hartley Parish Council.

It is first mentioned as "Hartley Gosse" in a document dated 1613, which suggests it started as scrubland. In the 19th century it was 34 acres in size, now it is only about 3 acres.

Gorsewood does suffer from time to time with litter, which has cost the parish council considerable sums to clear over the years. 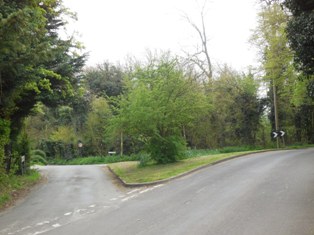 Haley Shaw is a small woodland on the corner of Grange Lane and Church Road. Historically it extended along the east side of Church Road between Grange Lane and Hartley Hill, and some fragments of this are still there. As it has retreated in one direction it has gained in that it extends further down Grange Lane now. Wallenberg in the Place Names of Kent suggested that it was named after Adam de Holeway (1278), and that Hartley Hill may have been the 'hollow way' he was named after.

The wood is in private ownership, but a public footpath passes through it heading towards the middle of Hartley Hill. 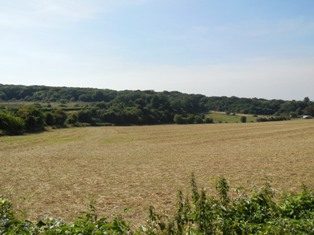 The view of Hartley Wood from the entrance to Hartley Bottom Road in Longfield could well be how Hartley looked to the early Anglo-Saxon settlers. It is the largest wood in Hartley with about 60 acres of trees. It can be accessed from many points, including Gorsewood Road, Beechlands Close, Manor Drive and Hartley Bottom Road. It even boasts streetlights for the path which links Gorsewood Road to the underpass leading to Langafel School, Longfield. 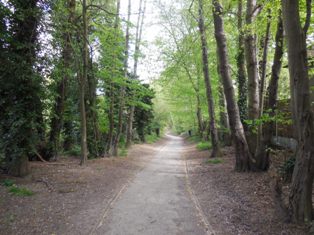 There are very many owners, because in the 1940s part of the wood was sold in building plots, for which the owners were never able to get planning permission. The parish council now owns some of these plots. There are a number of official and unofficial footpaths through the woods and one part of the wood owned by the London Borough of Southwark has been designated a village green.

There is a good chance Hartley Wood is not as old as Foxborough Wood. In the 16th century it was called Northfield Wood, after the field adjoining of the same name (not to be confused with the modern Northfield near New Ash Green and the Northfield Road on the Wellfield estate, neither of which are the same). 14th century records suggest Hartley Wood began as scrubland on the edge of the cultivated fields. 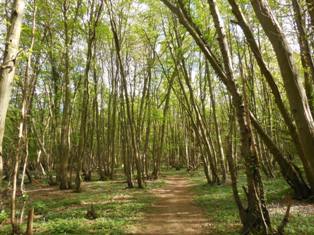 Hartley wood is predominantly hornbeam coppice with large oak standard trees. Coppicing in the wood shows signs of previous commercial use. Further back in time there may well have been charcoal burners here, as in 1613 Richard Stephens, a tenant of the owners, was a colier or charcoal maker. In the 19th century Hartley Wood was used for pheasant shooting and said to be 'admirably placed for rearing a large head of game'. This may be the reason that rhododendron bushes are to be found in the woods, as these were often planted then as cover for pheasants. 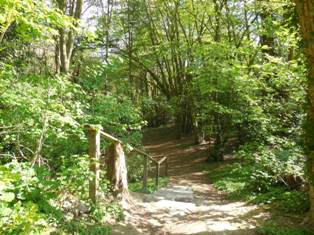 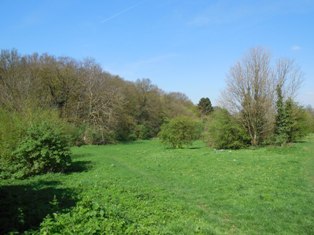 Hoselands Wood lies to the west of Rectory Meadow and is about 10 acres in size. When the Forestry Commission surveyed the wood in 1949 they classified the southern 3 acres as coppice (60% hornbeam, 40% ash) with oak standards, and the remaining 7 acres as oak 'high forest'. 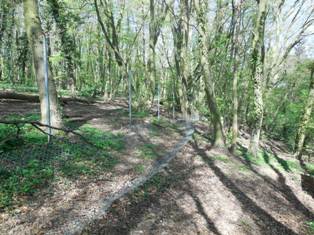 A few years ago the owner of the wood offered it free of charge to the parish council, but they did not accept the offer.

Northfield is the 65 acre field which divides Hartley and New Ash Green, it has also been called Black Lion Field and New House Field. There are two almost adjoining woods on the field, one old (New House Shaw) and one very new (Barnetts Wood).

New House Shaw is a classic shaw, that is a strip of woodland between two estates, in this case New House Farm and Hartley Court. As part of New House Farm it came into the ownership of the New Ash Green Village Assocation Limited in 1998, who have leased it as part of Northfield for 99 years to a consortium of Ash and Hartley parish councils. In 2005 it was named New House Shaw to honour the former New House Farm, at the suggestion of Councillor Stephen Glover of Ash Parish Council. 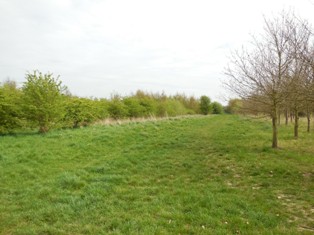 Barnetts Wood is a new wood of 11 acres (4.5 hectares), planted in 2002 and named in 2005 after former local parish councillor Alan Barnett. It is a newly planted wood of 6,000 broadleaved species. 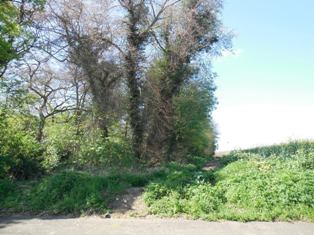 As a name Westlands is more or less lost. Once this wood extended much further north, but is now confined to an area around Old Downs House. The wood is in private ownership but in the recent past the public could walk through it. On some people's deeds the wood is marked as land to be leased for 99 years as amenity land, but this does not appear to have happened.

This article summarises the three churches of Hartley. For more information see their respective websites.