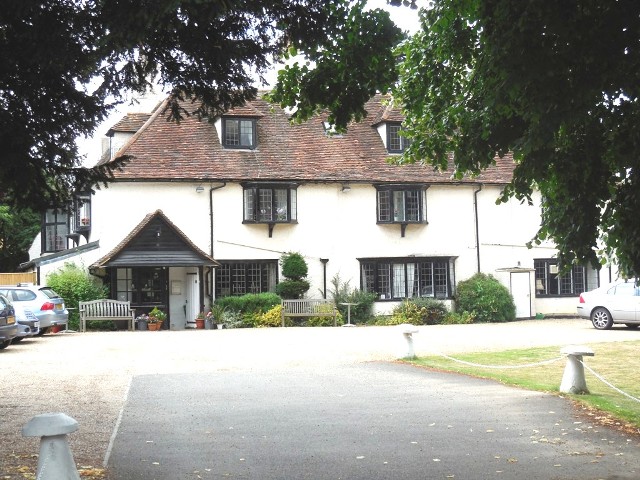 If you live on the west side of Ash Road between Chapel Wood Road and Parkfield, then the chances are (with a few exceptions) that you are living on part of Fairby Farm.  But the 19th century farm is really an amalgam of more than one older holding.

Fairby Grange and the land between Castle Hill and Fairby Lane

Beginning with the central part of the holding between Fairby Lane and Castle Hill.  We know that the owner was John Feerby in 1420 because he is mentioned as the plaintiff in court case where he was owed £7 (he was presumably still living here when made executor of the will of John Launce, rector of Southfleet in 1424).  He was an important personage, for two years later we find him appointed to enquire into "all falsifiers and counterfeiters of weights in the county of Kent".  Sometime later he moved to St Pauls Cray where he is buried in 1454.  By the end of the c15th Fairby had come into the hands of the Overy family.  William Overy of Horton Kirby left it in his will to his son John in 1482.  His grandson John died in 1555, then Fairby was the classic mixed farm with wheat, barley, oats, cows, sheep, pigs and poultry.  He also owned land at Fawkham and Ash, as well as Forge Cottage and the farms now called Woodins and Mintmakers in Hartley.  Moving three generations on to 1604, the Hartley estate was owned by brothers John and Richard.  They decided to partition the lands between them, John was allotted "Farbyes" and "St Peters" (Mintmakers).  Some time about 1650 Fairby passed out of the family and was bought by John Young, who hailed from Southfleet.

Around the mid c15th we know a John Paris was a landowner in Hartley. He appeared as a witness against the rector at a church court held at West Malling in 1438, where he said that the rector had celebrated mass in the presence of an excommunicated person. John died in 1451 and his will is one of the earliest surviving for Hartley. From his will we learn that he grew wheat and barley and kept sheep. He had three cloaks, one (his best) of russet. He left many gifts to the church, and on a more personal basis to Alice Brasyer "for looking after me in my illness". He had no sons, so he left his land to his daughter Rose Cotyer of Woodins. From place name evidence we know he owned 20 acres at the west end of St John's Lane (there was a later field which belonged to Fairby farm called Parrys Croft).

The Northern and Southern Part of the Farm

The remaining part of the later farm, that south of Fairby Lane and north of Castle Hill has a very different history, as it was associated with Pennis in Fawkham and Hartley Manor. Sometime about 1500 a London haberdasher, Elias Bingham, bought the southern part, together with lands in Fawkham and Ash from merchant taylor Laurence Harris. About the same time he had purchased Hartley Manor and Dawsland. He may have overextended himself for in 1515 he had to mortgage the estate and two years later this part of Fairby was purchased by the masters of the Savoy Hospital, which they sold on for £110 to one William Vertue. A few years later it had come to the White family. They eventually sold it to their long time tenant, Thomas Walter of Pennis in 1571, to add to the fields he already owned by 1541.   He divided his Hartley lands between his sons in 1590, and thanks to this we get a detailed list of the "Fairby" fields given to son John. This of course is the John who set up the coats and gowns charity and whose effegy can be seen on the fine wall monument in Fawkham Church. By 1657 the estate was heavily indebted and the heir Bennett Walter was forced to sell to Thomas Young, not before fighting a legal challenge to her husband's will by her two sons. This sale thus created the Fairby estate that lasted up to a century ago.

The map below gives a tentative layout of the two halves of the farm in the early 17th century. As fields are renamed, split or merged overtime, and we only have the descriptions in the surviving deeds to go on, it can only be a tentative plan. For example the deeds do not give a precise location of Great and Little Nutfields, although we have a general idea where they must be.

The Youngs and After

It was Thomas who built the house we see today in 1685 and moved there. According to the English Heritage listing, there is an iron wall plaque with the initials "TY 1685".

He died in 1688 but his son and heir John (1643-1713) also had to fight a legal battle over the estate from his niece Anne. Anne unsuccessfully claimed that Thomas's will was invalid and therefore the estate should be divided equally by the Kentish custom of gavelkind. As heir of her deceased father, she would have stood to inherit half the estate.

John added to the Hartley estate by purchasing Hartley Cottage, Stocks Farm and Forge Cottage. When John died, his elder son Thomas inherited Fairby. Thomas only had 2 children, Newton (1718-35) and Mary (1721-98), so when he died in 1747 it was Mary who became Fairby's new owner. Mary had married Richard Treadwell three years previously. Richard (1711-1803) lived to the age of 92, and his son Francis (1758-1851) matched him for longevity. Thus Fairby had only 2 owners in over a century. Recently an 1825 mortgage of Fairby has come to light, itself mainly to pay off an earlier mortgage. It records that Francis Treadwell had made an exchange of land with the neighbouring owner.

The Treadwells parted with ownership soon after (the 1852 advert gives a detailed description of the farm), and Mr J T Smith became the next owner. He employed Thomas Coulson as bailiff; Thomas was fined for letting a farm hand cattle along the highway in a foot and mouth outbreak in 1867. And on 7 March 1869 arsonists set fire to a wheat stack on the farm, in spite of the best efforts of the Dartford Fire Brigade, the stack was destroyed; the insurance company offered an enormous reward of £25 for information leading to an arrest. Edith Morton bought the house and 20 acres of land for £1,000 in 1906 and then spent £4,900 on the buildings and gardens. It was at this time the house came to be called Fairby Grange. She was succeeded by solicitor Robert Emmet in 1910.

Mr J T Smith sold it to James Timmins Chance, an glass industrialist from Smethwick. Then Thomas Morton bought the house and 20 acres of land for £1,000 in 1905 and then spent £4,900 on the buildings and gardens. It was at this time the house came to be called Fairby Grange. She was succeeded by Robert Emmet in 1910. The remainder of the estate was bought by Smallowners Limited and divided into smallholdings.

This was the time when people enjoyed taking long country walks for recreation. One such sightseer was Alfred Salter (1873-1945), a doctor and Christian Socialist from Bermondsey. He remembered seeing Fairby, and bought it when it came up for sale in 1917. He converted it into a convalescent home for poor women, consumptives and conscientous objectors (around 150 were able to stay here in WW1 (John W Graham - Conscription and Conscience, 1922) . One of those helped was George Dutch (1894-1983) who came here suffering from TB and other ailments. He wrote: "It was a glorious Spring and Summer and I remained there until October, working for the last few weeks in the gardens, orchards and hayfields. Thanks to good food and care and the fine Kentish air, I was completely cured. It is good to know that our world still produces good and clever men like Alfred Salter."

Mr Salter later gave it to the borough of Bermondsey as a home for mothers and children after childbirth and illness. In 1919 his wife Ada brought starving Austrian children here, who it is said, the village (but not the rector!) took to their hearts. In 1922 he gave the house to the borough of Bermondsey, and it then became a home for mothers and children after childbirth and illness. The children were known locally as "basket babies", from the distinctive wicker prams that became a familiar sight in Hartley's lanes. Fairby was also a plant nursery for the borough, as Ada and Alfred were keen to create a garden borough, and a municipal store sold its surplus vegetables. The Labour minister of health, John Wheatley, officially opened Fairby in 1924. In its first 3 years over 2,500 mothers and children came here, and infant mortality was slashed by a third. Ada and Alfred must have been effective political campaigners, for when they came to Bermondsey it was a Conservative borough with no Labour councillors, but by 1935 their oponents had lost every seat and had vitually withdrawn from the borough. No better valediction can be found than what he wrote when he knew he was near death: "I go with joy to my Master to start anew in His larger service. I ask my friends not to grieve over my death, but to rejoice that I was given great opportunities and that, by the Grace of God, I tried to utilize them in His Service and for the good of my fellow men, especially for them who are cast down and of low degree". The name of a house in Round Ash Way commemorates this remarkable man.

Bermondsey Borough sold the house in the 1950s and it reopened as a retirement home in about 1958. Many planning applications were made by interested parties for the 20 acre grounds, but in the end Ron Billings successfully applied to build Round Ash Way and the roads around it. It almost wasn't Round Ash Way, early plans show a verge instead of the green to satisfy the council's landscaping requirements. He offered part of the land to be the site of the new primary school, which the council accepted although their original plan was to build it where Billings Hill Shaw is today.

Fairby in Ash Road was one of Hartley's larger farms. It was named after John Feerby who lived here in 1420. The current house was built in the late 17th century and is now a nursing home. 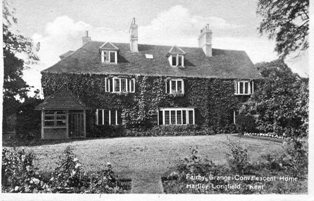 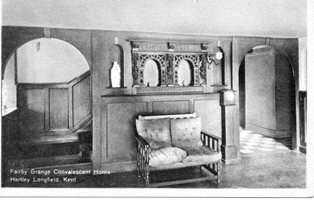 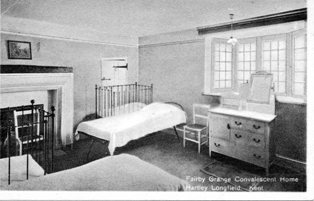 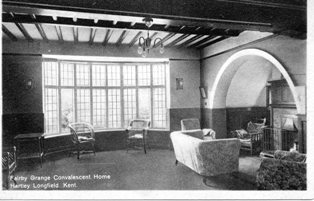 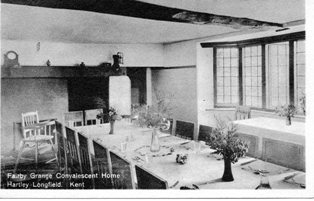