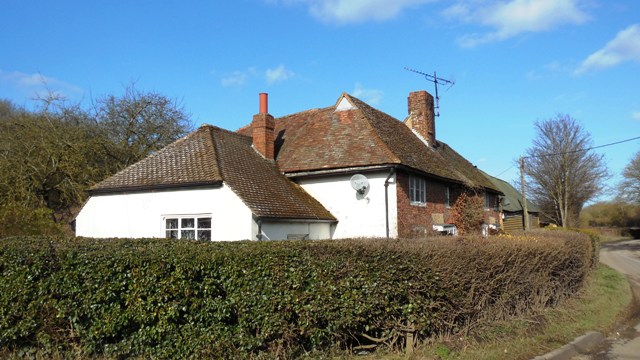 Hartley Bottom Farm, the home of the Glover family since 1913, is now Hartley's only farm of any size, but it was once one of the smallest in the village at 6 acres. Nor has it always been a farm. For over a century it was the Kings Arms Public House, and Mr Glover has in his possession a fragment of a beer mug inscribed "William Marshall, King's Arms Hartley".

According to English Heritage, who gave it Grade II listed status, the house is a 17th century or earlier timber framed building refaced in the 1700s. It may possibly have been the cottage and 6 acres which Richard Wilson owned with Goldsmiths in 1576, but the first definite reference comes from the will of Richard Miller of Ash (1625-71). In the will he states that he had inherited the farm from his brother Thomas, and it was probably the estate in Hartley left to Thomas and his brothers by their uncle Robert Averill of Ash in 1656 (the Averills had owned land in the village since at least the late 1500s). Richard was childless, so he left Hartley Bottom Farm to his cousin William Fenn of Ash.

Richard Miller also created an annual rentcharge of £1 to be paid by the owners of the farm, for the benefit of the poor of the parish of Ash. In 1837 the Parliamentary Commissioners for Charities reported that it was distributed annually in bread on the first Sunday after Christmas. His charity still exists today, though now merged with 7 other charities to form "The United Charities for the Poor", Ash. The ravages of inflation have meant that while £1 would have bought 34 four pound loaves in 1671, it will not buy even one of that size today. In recent years the charity has made grants to the New Ash Green Pensioners' Luncheon Club.

William Fenn sold the farm to Richard Walter in 1676, his family finally parting with the property in 1731, when Thomas and Anne Walter sold it to Christopher Hayward of Eynsford. Mr Hayward died in 1750 and left the property to his daughter Mary. His will is particularly generous to her, and no doubt reflects his concern that his only unmarried daughter should marry well. For as well as the King's Arms, she received a cash bequest of £350 - well in excess of what her married sisters received (her sisters no doubt had already received marriage settlements). Christopher's will is also the earliest evidence of it being a pub, because he mentions that his tenant was "John Knowles, victualler" (however he is already listed as the tenant on the oldest surviving parish rate book of 1744).

Mary married twice, first a John Hassell in 1751, by whom she had one son John. After his death she remarried nine years later to George Charrington of Beddington in Surrey. As a married woman in the days before the Married Women's Property Act of 1882, she was not permitted to own the King's Arms in her own name. Although by common law the possession of the house went to her husband, the inheritance of it did not. So when George died in 1795, the ownership reverted to Mary. Eventually it was inherited by John Hassell, her son by her first marriage. He appears to have sold it to William Bensted of Hartley Court before 1832. Thereafter the ownership follows a familiar pattern, as part of Hartley Court it was eventually purchased by Smallowners Limited and rented to Harold Glover (and later purchased by the family), formerly of New House Farm, Church Road in 1913.

Meanwhile the tenancy of the public house was held by John Knowles until his death in 1782. He was then succeeded by William Goldsmith, husband of his daughter Ruth Knowles, who in turn was publican until his death in 1803. William was also the freehold owner of Goldsmiths Cottage. Later tenants included Henry Pitman and Jeremiah Letchford. The pub ceased to be licensed in the 1870s, probably due to its habit of serving drinks on Sundays during the times of Church services, an offence which landed John Coller, the then publican, and three of his customers in Dartford Police Court in 1872. One former farm worker there, born in about 1880, could remember tales of his grandmother regularly going down to the King's Arms to drag her husband out! Afterwards the tenants for many years were William Vone, wheelwright, and his wife Jane.

All this time Hartley Bottom Farm was merely the house and a field of about 6 acres adjoining. Since then of course under the management of the Glovers, the farm has expanded to take in Goldsmiths, Hartley Manor Farm and the remnants of the Hartley Court estate. In 1945 the farm had grown in size to 90 acres, and since then the landholdings have been further augmented by purchases of Hartley Manor Farm and land at Idleigh. The farm was highly praised from Mr Lewis the Ministry of Agriculture inspector in 1941, who said they were doing an excellent job on what he considered to be not the best land. Then as now, the farm was mixed arable and pasture, at the time the animals were an essential part of arable farming too.

The map below shows the historic extent of the farm up until the 20th century (pink) and the part of the farm today which lies in Hartley parish (green, the farm also extends into Ash parish). 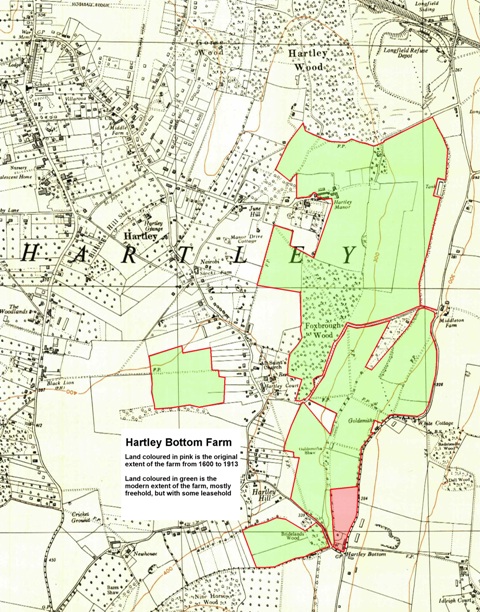 The business continues to develop under Harold's grandsons, Roy and Eric Glover. It is worth noting with the help of modern technology, Hartley Bottom Farm alone probably produces as many arable crops as the whole of Hartley did in the "high farming" period of the 1840s; agriculture is after all still the country's most vital industry. The latest development is the new butcher's shop which is well worth a visit. This has received much coverage on the radio and in the papers, and has won praise from the National Farm Union president, Ben Gill, for being an example that other farms should follow. 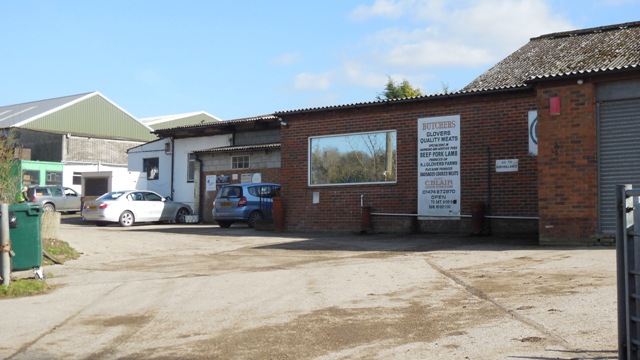 I would like to thank Mr R Glover for all the help given in this article.

Hartley Bottom Farm is now Hartley's only farm of any size. The house has expanded from a 6 acre smallholding in 1600 to the large farm of today.